For decades, conflict has surrounded Korea. Whether it be the fight between China and 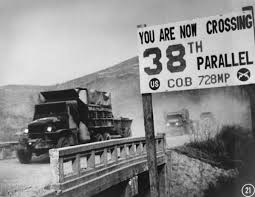 Japan for control of the country in the Sino-Japanese War, or the Civil War that brought Asia into the first military action of the Cold War, Korea has always been surrounded by hostility and finally fell into Japanese hands who would control the peninsula until the end of WWII. Japan’s loss of Korea goes back to U.S. involvement in WWII and the Rape of Nanking. The Korean War started in 1950 and lasted only three years, coming to an end in 1953. Due to the political division of Korea, war was inevitable during a time where the threat of a communist takeover, loomed.

Throughout its existence, Korea has been treated as a tributary country and was constantly fought over by Japan and China. The bad blood between these two countries boiled over with the start of the Sino-Japanese War and especially the rape of Nanking. Also known as the forgotten Holocaust, the rape of Nanking began with the Japanese invasion of China in 1937.  During this invasion, the Japanese brutally murdered 15,000 Japanese men as well as brutally raped and murdered 20,000 Chinese women of all ages. This done in what was supposed to be declared a “safe zone” established in a Women’s Arts and  Science College. Not only were women and children the objects of hostilities by the Japanese army but “headhunts” were commonplace. Newspapers all over Japan advertised head hunting competitions and encouraged Japanese soldiers to behead as many Chinese men as possible. Once exceeding the decided amount needed for the win, military leaders delighted the citizens of Japan by exceeding and raising the finish line total to over 100 a piece. The newspapers also published photographs of rows of Chinese heads collected by those in competition. The lack of mercy, disregard for laws of war, and brutality of the Japanese army led to American intervention.

Due to allied U.S. relations with China, President Franklin D. Roosevelt ordered embargoes on trade with Japan, demanding their immediate exit from China. However,

the U.S. attempt to stop the Japanese invasion of China ended in the retaliation bombing of Pearl Harbor on December 7, 1941. President Roosevelt described this day as one that “will live in infamy” in his address to the nation informing them of the official declaration of war against Japan. The United States involvement in WWII is a key factor as to why Korea eventually ended up in the hands of the United Nations and in turn, the U.S. After the end of WWII, the results of the Allied conference at Cairo led to the division of Korea into North and South regions split by what is now called the 38th parallel. The division of Korea meant that the two regions would be controlled by different countries, specifically the South being controlled by the U.S. and the North by the USSR. This was first done as a temporary means of forming a new government in Korea however, the extreme differences in ideology between the United States and the USSR posed a major problem to the unification of the country. U.S. controlled South Korea adopted democratic government whereas the USSR controlled North Korea, remained communist. Naturally, this caused problems between the two regions and would eventually cause a civil war between the citizens on either side of the 38th parallel.

In order to better understand the looming Korean War, it is important to understand the mass paranoia and concern that communism raised during this time period. In 1947, the United States and the Soviet Union entered what would later be called The Cold War. Being the only war in American history without bloodshed, it is often referred to as a ‘war of words’. Although Historians debate when the war actually ended, the Cold War was also the longest recorded war in history and generally thought of as lasting from 1947 until 1991. The Cold War started as a preemptive war aimed at the containment of communism. There was a deep fear of the domino effect and the possibility that communist countries would eventually take over the world. It was the USSR’s production of ballistic missiles that stoked the fire and put the United States on high alert. This constant fear and paranoia of nuclear warfare sparked events such as the Cuban Missile Crisis and the space race. The fear of the spread of communism was so strong that President Truman set out to contain it indefinitely. The Truman Doctrine was passed in 1947 to do exactly that and Truman’s plan for  “Containment” became the official foreign and domestic policy of the United States.

Going forward, the entire world was on edge about the possibility of communist attack and Americans prepared accordingly. Safety regulations and instructions were shown in schools and on every television screen in America. In 1951 the U.S. government released the Bert the Turtle campaign. This campaign featured a sheepish turtle protected by a military helmet and sporting a bowtie. Children were then instructed by Bert the Turtle to get under their desks and duck and cover at the sign of an Atomic Flash. Made to educate America’s youth about what to do in case of an Atomic bomb, “the duck and cover” served as an everyday reminder that the end of the world could possibly be near and kept citizens tuned into the compromise of safety caused by the USSR. Not only did government warnings raise hysteria but the just beginning everyday use of television in America was also a factor. Instead of just hearing the evening reports of Russian deviance on the radio, now they could actually see it. This brought a new level of reality and urgency to the world of politics and greatly influenced America’s views on going to war.

With the current hysteria in America, it is not surprising that President Truman would send troops once North Korea’s dictator invaded South Korea. Becoming a war of ideology and containment, United States military action in Korea was a direct result of Cold war tensions between the U.S. and Russia and what started as a civil war between the two regions of Korea had now brought Asia into the Cold War. Led by General Douglas MacArthur, American troops were deployed to aid in the fight for South Korea. It took McArthur a little under a month to regain everything up to the 38th parallel and to free South Korea from the communist North. Although McArthur was instructed not to enter China, as they neared the Yalu River which marked the border between China and North Korea, General MacArthur did not heed the warning.

Thinking that the North Koreans had retreated into Manchuria, MacArthur continued toward the Yalu River. Having many previous successes and being accustomed to reining in Japan after WWII, MacArthur often played by his own rules. Being an “iron hand”, McArthur’s policies were swift and unforgiving. Being warned by Truman on several occasions, one being their meeting on Wake Island, that if he interfered with the Chinese they could be facing another World War, MacArthur scoffed at the idea and declared that “the war would be over by Thanksgiving”. Little did he know that the Chinese were ready and waiting. When the Chinese saw the approaching forces as a threat, they sent soldiers. MacArthur soon realized he had underestimated the Chinese army and retreated back behind the 38th parallel. After being given 5 Congressional Medals of Honor for his service, General MacArthur was fired by President Truman himself for this event of disobedience. In July of 1953, the Korean War came to an end. In total some five million soldiers and civilians were killed during the war. A truce but no treaty was signed in 1953, and the peninsula was formally divided into its present-day boundaries. A highly patrolled “no man’s land” separates the two nations.

In the end, nothing really came out of the Korean War. It is still divided at the 38th parallel and remains one of the only communist countries in the world. President Truman and so many after him, may not have prevented or eliminated communism, but they did successfully contain it. Despite the mass hysteria and panic over nuclear warfare and communism, it is because of policies like Truman’s and the influences of countries such as the communist government of North Korea that have both put us on high alert, and in some ways, may have saved the world.

This site uses Akismet to reduce spam. Learn how your comment data is processed.